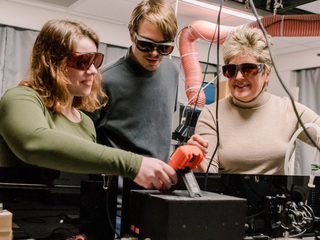 At some point in its development, every drug, high-tech piece of clothing, and synthetic building material was touched by a chemist. However, getting the atoms attached to each other in just the right way to treat infection, keep you dry in the woods, or construct your home often requires extreme measures. Harsh chemicals and dangerous byproducts from those manufacturing processes have the potential to cause environmental damage and impact the health of lab workers.

Lisa Kelly, associate professor of chemistry and biochemistry at UMBC, is developing techniques to make some of those same chemicals in much safer ways. The National Science Foundation has funded her with $450,000 for three years to further this work, which also has biomedical applications.

“The approach that we propose will induce chemical reactions that would otherwise need a lot of harsh reagents and organic solvents, and just a lot of nasty stuff,” Kelly says. “This is a greener route.”

The technique Kelly is using can be very helpful for inducing the formation of strong chemical bonds between two molecules, when their interaction would typically be much weaker. Gabrielle Pozza ’20, chemistry, Lisa Kelly, and Ph.D. student Ryan Grant examine a fluorescent dye used in their research to determine the properties of compounds they work with.

The first step is to chemically attach a special compound to one of the two molecules you want to connect. Shining UV light on the compound causes it to release a single atom with a negative electric charge, called a radical. Because it is charged, that atom will react strongly with molecules around it. In this case, the radical initiates the formation of a strong bond between the two molecules you want to connect. The only byproduct of the reaction is carbon dioxide, and it can be carried out in water, so it’s much safer than existing methods.

This process can be used for a variety of purposes. For example, you can induce strong bonds between a drug and its target to better understand the drug’s mechanism. This essentially freezes their fleeting interaction in time, giving a scientist the chance to observe it.

This technique can also be used in a more general biological context, to better understand how an enzyme and its target protein interact. And it could increase the efficiency and safety of generating polymers—long chains of molecules—used in various industries, like adhesives or flame retardants. It could also be used to add molecules to surfaces to give them desirable properties.

Adding to the biological toolbox

With the NSF funding, Kelly’s lab will look at how efficiently different compounds can create radicals, and what kinds of reactions the radicals are best at initiating. She’s hoping that their findings will be useful for researchers in a range of fields, including medicine. “They could take the information that we’ve disseminated and then use it in their bigger biological toolbox,” Kelly says. Lisa Kelly, Ryan Grant, and Gabrielle Pozza (left to right) discuss results from a recent experiment in the lab.

Kelly is also involved with a startup in Utah using a similar technique to create a natural alternative to the metal stents that treat heart disease. Staining the artery with the special compounds and then exposing them to light creates a rigid structure that avoids the need for a traditional stent. The product is currently undergoing FDA approval.

“We’re able to give guidance to the drug discovery companies based on our insight into the chemical mechanisms,” Kelly says. “That’s what’s really exciting to me: We can actually come up with practical information to help guide better drugs and structural biology tools.”

Kelly is also excited about how her new funding will impact UMBC students. “Part of the grant support is not just doing the lab work, but also disseminating it, so my team and I can travel to present the work at national conferences,” she says. “It’s really important to me to be able to bring graduate students with me when I go to meetings and have them share the same sort of networking opportunities that I benefited from.”

Kelly has cultivated rich connections within the photochemistry community, a field she chose intentionally. “It struck me as a way to be able to do everything that I was interested in without having to be this or this or that,” she says. “It was a multidisciplinary, practical field that’s served me well in my career.” And now, she’s introducing UMBC graduate students to this unique field and how scientists can bridge multiple disciplines to impact society.

As a photochemist, “It’s not good enough for me to make something and show that it does something cool,” Kelly says. “I want to map out all the driving forces that control it, and when I understand that, then I can make the process happen better.”