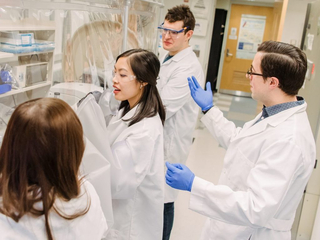 UMBC’s Aaron Smith is now thinking “bigger picture” about how his lab’s research can support human health at the molecular level thanks to $1.5 million in new research funding.

Smith, assistant professor of chemistry and biochemistry, focuses on how biological systems take up and process iron. Last winter he received a significant grant for research on developing new antibiotic targets. Now, he’s earned a prestigious $500,000 National Science Foundation CAREER Award and $1 million from the National Institute of General Medical Sciences, a division of the NIH. The work he and his students are doing is at the molecular level, but it has implications for everything from cardiovascular disease to embryonic development.

Smith’s bioinorganic chemistry lab works to understand how metals function in biological systems, with a particular focus on iron. While it may be strange to think about metals functioning in our bodies, they are critical. “For biological systems to expand the types of chemistry that they can do, they need metal ions,” Smith says. “Metals open up the toolbox for the protein to be able to accomplish so much more.” Aaron Smith works at the hood in his lab.

The NSF and NIH funding will allow Smith’s lab to increase understanding of how iron is involved in adding molecules to proteins after they are made. This process is known as post-translational modification.

“Post-translational modifications are incredibly important,” Smith says. Even the most complex organisms don’t have more than a few tens of thousands of genes that provide instructions for unique proteins, but proteins perform many times that many functions in the body. Post-translational modification “really diversifies the number of functions that proteins can serve,” Smith says.

Smith’s lab is studying a specific post-translational modification called arginylation. An enzyme known as ATE1 carries out arginylation, by attaching the amino acid arginine to proteins. Then, “the arginine functions as a molecular flag that says, ‘I should be degraded,’” Smith explains. The ability to break down the right proteins, and then use their building blocks to rebuild other cellular materials, is crucial for the healthy functioning of our bodies over time.

“ATE1 is very impactful, but we don’t know a lot about how it does what it does,” Smith says. Even the structure of ATE1 is unknown, as well as the mechanism by which it adds arginine to proteins. Smith says his lab has an idea, “but my guess is it’s going to be much more complex when we figure this out.” The lab at work.

Research on arginylation is increasing rapidly, and Smith believes his lab has a particular role to play. Most labs are looking at arginylation at the cellular level and up, asking questions like how it affects different processes in a cell or even an entire organism. But Smith is taking things to another level by studying the atomic structure of individual ATE1 enzymes and the proteins they interact with.

“We think that we fit in very nicely in this research space,” Smith says, “We’re filling a niche that remains really uncovered at this point.”

Smith’s group is looking at how ATE1 is regulated, such as how it knows which proteins to add arginine to or how it responds to changes in the cell. They’ve already gotten some promising results related to iron’s role in regulating ATE1. And they’re getting close to revealing the enzyme’s complete molecular structure, which would provide big clues into how it works. The NIH and NSF funding will help answer these questions.

Once the structure and mechanism are in hand, it will be time to explore applications. For example, “Could we think about then making this protein a target for therapeutic development?” Smith asks. “Given how important it is in these various cellular processes, if we understood better the structure and the mechanism, we could think about ways to develop small molecules that could help with diseases associated with arginylation.” In addition to aiding the progress of his research, Smith is excited that both grants will allow him to expose more students to bioinorganic chemistry. His CAREER Award proposal “has an additional education component that’s about specifically trying to leverage the diversity efforts already going on here at UMBC, and to help increase diversity in bioinorganic chemistry.”

To that end, Smith will introduce all of the first-year chemistry courses at UMBC to bioinorganic chemistry. He’s also developing a new upper-level elective on bioinorganic chemistry. Smith hopes that by taking the course, students may then “consider going into a research career for a field that they didn’t even know existed, that helps tackle some of the most important chemical transformations on the planet.”

“I’m proud to think that my lab reflects the diversity that we see on UMBC’s campus, and I’m happy to continue moving forward with that,” Smith shares. “It’s important to have a lab that reflects this university and the country, to benefit from a broad range of perspectives and to train the researchers of tomorrow.”

This new funding will significantly expand the opportunities available to Smith and his students, and it’s reshaping how they think about the work. Having strong funding “affords you the ability to imagine more,” he says, “to think bigger picture about different avenues you might pursue.” Now, Smith and his students will be dreaming big as they steward this new research funding to better understand arginylation, metal transport, and their roles in human health.

Banner image: Aaron Smith works with his students in the lab. From left to right: graduate students Alexandrea Sestok, Verna Van, and Nathan Max. All photos by Marlayna Demond ’11 for UMBC.