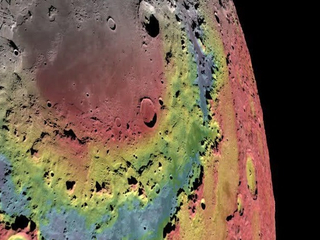 This story was first published on news.umbc.edu and was written by Sarah Hansen.
New research published in Science provides unprecedented detail about the structure of the Orientale basin, a huge crater on the Moon. The latest findings offer “an important clue in trying to unravel the formation history of the solar system,” says Sander Goossens, associate research scientist at UMBC’s Center for Space Science and Technology (CSST) and a lead analyst of satellite data for the project.
Two Gravity Recovery and Interior Laboratory (GRAIL) spacecraft measured the gravitational pull above the crater on a mission in 2012, flying within two kilometers of the surface in some locations. “We were able to use data from GRAIL to make an extremely high resolution map of the gravity field of a feature on the Moon,” says Goossens. “That hasn’t been done before, anywhere in the solar system.”
Goossens explains, “The surface topography of the moon has already been measured very precisely by the ongoing Lunar Reconnaissance Orbiter mission, so we have those data in hand.” Those data combined with the new gravitational map allow researchers to better understand what’s going on below the surface. For example, gravitational data reveal high mass concentrations beneath some topographical depressions, which indicates geological processes deep within the Moon. The new data also suggest that the original crater diameter was between 320 and 460 kilometers, and that during impact about 3.4 million cubic kilometers of material was displaced.
Analysis of the data suggests that the moon has been “battered by impacts,” and it’s likely that Earth and other planets experienced the same thing as the solar system took shape, says Goossens. What scientists learn about processes on the Moon that resulted from these frequent impacts may apply to similar moons and planets such as Mars, Mercury, and Earth. “A lot of the planets have a similar make-up, so you can extrapolate,” he says.
Even today, Goossens points out, “Impact cratering is perhaps the most significant geologic process going on throughout the solar system.” Exploring it on Earth is challenging, as surface material is constantly being recycled by plate tectonics, but Goossens would like to see a GRAIL-type mission to Mars, to better understand the relationship between gravity and topography that exists there.
The research team expected GRAIL to map the gravitational field of the Orientale basin to a resolution of about 30 square kilometers. But when GRAIL delivered, “The data were so good,” Goossens says, “that it was easy to double and then double again the resolution.” With such a high volume of data pouring in from GRAIL, “We had to move our processing from our own local computer cluster to a super computer at Goddard [Space Flight Center].”
With their traditional processing program, the team would map the entire Moon at once, but the unprecedented volume of data delivered by the GRAIL instruments meant computations on a moon-sized scale would take an extremely long time to complete, even on a super computer. Goossens responded by developing a new local modeling method that uses data specifically from the Orientale basin area. It allows the team to take advantage of the high resolution data GRAIL provides and complete the processing in a reasonable amount of time.
The hard work the team put in to quickly devise the new modeling method was worth it. Science featured their research, including a stunning full-color visualization of the Moon, on its cover. As it turns out, Goossens says, the challenge of finding the most effective way to process a massive amount of data “is a good problem to have.”
Image: Visualization of the Orientale basin on the Moon from the cover of Science; Ernest Wright, NASA/Goddard Space Flight Center Scientific Visualization Studio.
Tags: ovpr-news-2016
0 Comments (requires login)