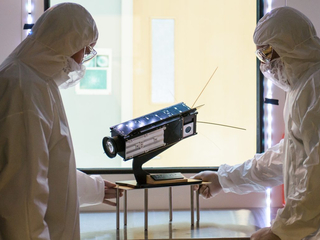 This story was first published on news.umbc.edu and was written by Dinah Winnick.
Just one month after honoring UMBC’s continued national leadership in teaching and innovation, U.S. News & World Report has recognized UMBC as a global leader in higher education. The ranking focuses on academic research and reputation, and in UMBC’s case particularly highlights the university’s strength in international collaborations, and the percentage of UMBC faculty publications that are among those most cited.
The 2017 U.S. News Best Global Universities list includes the world’s top 1,000 institutions across 65 countries. UMBC was also featured in the 2016 list, which included the top 750 universities in 57 countries. The ranking considers 12 factors in areas such as global and regional research reputation, publications, citations and citation impact, and international collaboration (see methodology).
In subject area rankings, UMBC ranked #120 globally in geosciences and #141 in space sciences. UMBC’s geoscience research publications are particularly strong, with UMBC ranking an outstanding #5 globally both in the percentage of geoscience publications among the most cited and in normalized citation impact. In space science, UMBC was ranked #12 globally for strength in international collaborations.
Although this particular ranking focuses on faculty research productivity and reputation, there are clear connections between those factors and the experiences of UMBC’s student researchers, across disciplines. As Karl Steiner, vice president for research, reflected in September, when U.S. News announced its national rankings, “An integral part of the student experience at UMBC is the opportunity to participate in and contribute to state-of-the-art research conducted across the campus, addressing some of our society’s major challenges.”
Tags: ovpr-news-2016
0 Comments (requires login)