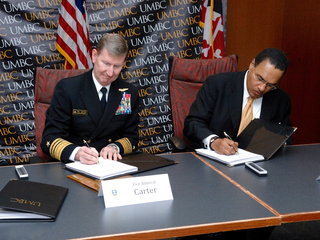 UMBC President Freeman Hrabowski and U.S. Naval Academy (USNA) Superintendent Vice Admiral Ted Carter signed a Collaborative Research and Development Agreement (CRADA) on Tuesday, April 21, 2015. Both leaders shared their excitement about the potential discoveries that can be made through this new collaboration, with Hrabowski remarking, “We’re delighted to be forming this partnership.”

The CRADA formalizes opportunities for collaboration between faculty from UMBC and USNA. Five projects have already been awarded funding from the Office of Naval Research.

One team is working to create quantum computers that could be exponentially faster than traditional computing technologies. Physics researchers are taking advantage of nanoscale defects in the structure of diamond and an atomic property called “spin.” “It sounds kind of exotic to people working in silicon chips,” said USNA Professor Peter Brereton. Carter, a former Navy pilot, noted that advances in computing power enhance the Navy’s ability to respond to threats, up to today’s fourth-generation fighter planes.

Another project hopes to generate self-aware computer systems that can detect when they’re being hacked. Sensors would be able to measure their own power supply, for example. “It’s like giving you the ability to find out that a teenager had a secret house party over the weekend,” said UMBC Assistant Professor Ryan Robucci, “not because you were there or heard it, but because there might be a spike in the power meter.”

A third team is developing computer programs to detect cyberattacks from social media posts. The researchers noted that companies’ reluctance to reveal they have been hacked can delay important responses, such as bolstering cyber defenses. “It’s the user that knows something has gone wrong,” said USNA Professor Nate Chambers. And users tweet about their complaints. If Chambers and his colleagues can use those tweets to precisely identify widespread hacks, cybersecurity teams could respond more quickly.

Another project is trying to make cloud computing more secure. In addition to developing security models for data stored in the cloud, the team will outline recommended policies for cloud-computing services so users can know if a service is up to snuff. Of particular interest is making sure that if data is removed, the removal can’t be detected. “That kind of metadata may leak a lot of information,” said USNA Professor Seung Geol Choi. They call it the “obliviousness property.”

The final team is developing novel authentication practices for mobile devices to make them more secure. “The user is often the weakest link in the security chain,” said UMBC Professor Ravi Kuber. This project looks beyond text- and image-based authentication and instead focuses on tactile methods, such as a pattern of device vibrations. The goal is to prevent over-the-shoulder hacks.

Beyond the exciting possibilities of this research, Carter and Hrabowski are both enthusiastic about growing the relationship between USNA and UMBC. Hrabowski emphasized that many families at UMBC have military connections and he shared, “People have been asking us for a long time to get more connected to the Navy.” In addition to this CRADA, UMBC is now the first university in Maryland to host a Naval ROTC program, which will build a connection between the two schools at the undergraduate level.

“Where will we be in thirty years?” Hrabowski asked. Our faculty and students are now hard at work answering that question.