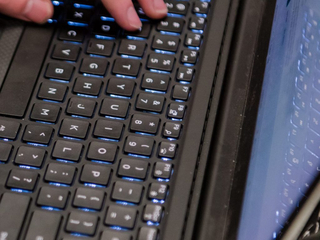 Over the past several months, the topic of online voting has been top of mind for millions of Americans and has been widely debated. Supporters often highlight how it would increase voter turnout through improved accessibility and convenience. Privacy and election integrity are among the top concerns about implementing an online voting system.

Researchers from UMBC and xx.network have been working to design an online voting system that is resistant to coercion and would provide a secure way for people to cast their ballots from computers, tablets, and smartphones in the future. Alan Sherman, professor of computer science and electrical engineering, is developing the system, VoteXX, with David Chaum, a cryptographer known for his work on privacy-centered technology, and Richard Carback ‘05, M.S. ‘08, Ph.D. ‘10, computer science, who has spent his career deflecting would-be hackers. Alan Sherman, right, talking with Rick Forno on campus in 2018. Photo by Marlayna Demond ’11 for UMBC.

As described in the researchers’ new whitepaper, VoteXX allows voters to confirm that their ballots were accurately cast, collected, and counted, without revealing how they voted. This system uses ideas from an earlier system, Remotegrity, that the collaborators developed and used in a municipal election in Takoma Park, Maryland, in 2010. Voters received secret vote codes on a scratch-off card via traditional mail, which they used to hide their votes from the software and hardware.

To address the issue of coercion, VoteXX enables voters to cancel or change their vote up to a certain deadline.

The collaborators are also urging Congress to create a non-partisan National Research Center for the Technologies of Democracy. The center would study elections, voting systems, ballot design, usability, and accessibility, in addition to other topics. They suggest the center be created as part of the existing National Cybersecurity Federally Funded Research and Developments Center.

Sherman shares that the applications of this work are widespread and significant. “The techniques developed in the VoteXX project can enhance the security of all forms of remote voting,” he notes, “including Internet voting and vote-by-mail.”

Banner image: A person typing on a computer. Photo by Marlayna Demond ’11 for UMBC.