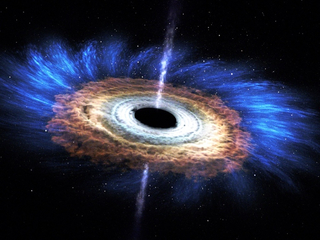 The supermassive black holes at the centers of galaxies are the most massive objects in the universe. They range from about 1 million to upwards of 10 billion times the mass of the Sun. Some of these black holes also blast out gigantic, super-heated jets of plasma at nearly the speed of light. The primary way that the jets discharge this powerful motion energy is by converting it into extremely high-energy gamma rays. However, UMBC physics Ph.D. candidate Adam Leah Harvey says,“How exactly this radiation is created is an open question.”

The jet has to discharge its energy somewhere, and previous work doesn’t agree where. The prime candidates are two regions made of gas and light that encircle black holes, called the broad-line region and the molecular torus.

A black hole’s jet has the potential to convert visible and infrared light in either region to high-energy gamma rays by giving away some of its energy. Harvey’s new NASA-funded research sheds light on this controversy by offering strong evidence that the jets mostly release energy in the molecular torus, and not in the broad-line region. The study was published in October in Nature Communications and co-authored by UMBC physicists Markos Georganopoulos and Eileen Meyer.

The broad-line region is closer to the center of a black hole, at a distance of about 0.3 light-years. The molecular torus is much farther out—more than  3 light-years. While all of these distances seem huge to a non-astronomer, the new work “tells us that we’re getting energy dissipation far away from the black hole at the relevant scales,” Harvey explains.

“The implications are extremely important for our understanding of jets launched by black holes,” Harvey says. Which region primarily absorbs the jet’s energy offers clues to how the jets initially form, pick up speed, and become column-shaped. For example, “It indicates that the jet is not accelerated enough at smaller scales to start to dissipate energy,” Harvey says.

Other researchers have proposed contradictory ideas about the jets’ structure and behavior. Because of the trusted methods Harvey used in their new work, however, they expect the results to be broadly accepted in the scientific community. “The results basically help to constrain those possibilities—those different models—of jet formation.” To come to their conclusions, Harvey applied a standard statistical technique called “bootstrapping” to data from 62 observations of black hole jets. “A lot of what came before this paper has been very model-dependent. Other papers have made a lot of very specific assumptions, whereas our method is extremely general,” Harvey explains. “There isn’t much to undermine the analysis. It’s well-understood methods, and just using observational data. So the result should be correct.”

Georganopolous, associate professor of physics and one of Harvey’s advisors, originally developed the sed factor concept, but “applying the idea of the seed factor had to wait for someone with a lot of perseverance, and this someone was Adam Leah,” Georganopoulos says.

Harvey shares that the support of their mentors, Georganopoulos and Meyer, assistant professor of physics, was instrumental to the project’s success. “I think that without them letting me go off on a lot of tangents and searches of how to do things, this would have never gotten to the level that it’s at,” Harvey says. “Because they allowed me to really dig into it, I was able to pull out a lot more from this project.”

Harvey identifies as an “observational astronomer,” but adds, “I’m really more of a data scientist and a statistician than I am a physicist.” And the statistics has been the most exciting part of this work, they say.

“I just think it’s really cool that I was able to figure out methods to create such a strong study of such a weird system that is so removed from my own personal reality.” Harvey says. “It’s going to be fun to see what people do with it.”

Header image: The remnants of a star torn apart by a black hole form a disk around the black hole’s center, while jets eject from either side. Artist’s rendering courtesy of NASA.