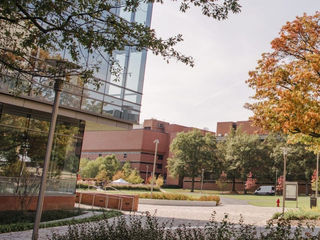 This fall, the student-organized TEDxUMBC gave ten speakers the opportunity to share their stories, experiences, and expertise with the world. Surprisingly, the theme, “Unmasking Uncertainty,” was actually conceived far before COVID-19 surged globally.

Tirzah Khan ‘20, information systems, led the TEDxUMBC team in organizing the event. When the planning committee chose their theme, she says, they did not anticipate the global pandemic, the resurgence in demands for racial justice, and a divisive election. “In these unprecedented circumstances, TEDxUMBC seeks to provide answers and build community,” Khan reflects.

A bumpy road to study in the U.S.

One of the speakers was Sahara Ali, Ph.D.‘26, information systems. She shared her path from Pakistan to the United States for graduate study and explained how it changed the way she approaches challenges. At age 21, Ali had graduated with her bachelor’s degree in computer science in Pakistan. She was eager to begin pursuing her Ph.D. at UMBC and to marry her U.S.-based fiancé. But it took over a year for Ali to obtain her visa from the U.S. Embassy. The delay changed her marriage plans and she feared it would make international graduate study impossible as well.

Facing a long and uncertain wait, Ali dedicated herself to her work in Pakistan. But just days after deciding to move on, she received her visa. She had to start over with her U.S. plans, rethinking how she would get to Maryland, where she would live, and what the experience would be like.

Ali says this situation taught her about her resilience and using creativity to work through unexpected obstacles. “Uncertainty can lead to something exciting, something innovative,” she shared, even if it means learning something “in an unconventional way.”

Today, Ali is pursuing her Ph.D. in information systems full-time at UMBC. She is working alongside Jianwu Wang, assistant professor of information systems, and collaborating with NASA scientists to study the causal effects of climate change.

Moving theater to a virtual space

Asif Majid ‘13, interdisciplinary studies, shared his passion for community theater and how he has adjusted his work (which previously depended on live, in-person audiences) to fit online formats. Majid works at the intersection of Islam, media, marginality, and politics, and develops plays that focus on stories of racially and religiously marginalized communities. His TEDxUMBC talk took the audience back to the second week of March, when the COVID-19 pandemic first began impacting nearly every aspect of life.

At the time, Majid was in the final stages of producing a new play with a theater in Washington, D.C. Work had been underway since July 2019, and the show was scheduled to debut in front of an audience for the first time at the end of March 2020.

Majid was living with his older family members and became quite concerned that continuing to work in face-to-face settings could put his family members at risk. He decided that while the show needed to go on, it had to move to an online space.

In collaboration with the creative team, Majid figured out how the actors could perform from their own homes, and how attendees could watch the play remotely from around the world. “Over the course of two weeks, we learned about new technologies, rehearsed the tech to performance, and developed a new approach to making theater,” he said.

Ultimately, the performance attracted nearly eight times the number of people who would typically see a show in one night, and people tuned in from 18 countries.

Also featured in the event was Evangeline Kirigua ‘21, political science, who discussed the importance of empowering foreign-born nationals to engage in their communities without being able to vote. Haleemat Adekoya ‘23, political science, talked about being present in the moment, and how to face “what ifs” that can cause fear and uncertainty. Karis Barnett ‘21, chemistry, shared how to identify and address your internal critic to discover self-worth.

Other speakers gave a window into different fields. John Hebeler, a part-time lecturer in information systems, spoke about machine learning, including the impact that it is having on people now and will continue to have in the future. Maryam Elhabashy ‘21, anthropology, discussed the challenges around integrating ethnic studies into school curricula, and how attempts to celebrate diversity may inadvertently lead to otherization. Mike Spano ‘21, psychology, talked about theories related to sleep and dreams, and how to mold your dreams into reality.

Like Ali and Majid, speakers reflected on personal experiences. Rojin Najmabadi ‘21, biological sciences, discussed the decision to invest in herself on her path to success, even when that decision went against how she was raised by her family. Zareen Taj, Ph.D. ‘26, language, literacy, and culture, shared her personal story of empowerment and achievement as an Afghani woman who grew up in refugee camps.

Tess McRae ‘21, individualized studies, concluded the event by encouraging attendees to use the lessons and insights shared by the presenters in their own lives. The event coordinators plan to share the event recording on the TEDx YouTube channel so that the presenters’ messages can continue to be shared.

Banner image: UMBC’s campus in the fall. Photo by Marlayna Demond ’11 for UMBC.