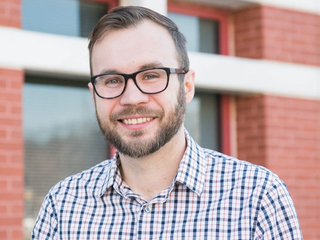 Last Thursday, UMBC’s Lee Blaney was honored for his impact as a chemistry educator and mentor who closely involves students of all levels in collaborative research. Blaney is an associate professor of chemical, biochemical, and environmental engineering. He received the 2020 George L. Braude Award from the Maryland section of the American Chemical Society. Blaney was nominated for the award by Mark Marten, chair of chemical, biochemical, and environmental engineering at UMBC. During the virtual meeting of the society, Blaney presented his research on the occurrence of contaminants of emerging concern in the Chesapeake Bay.

Blaney said that he was honored and humbled to receive the 2020 George L. Braude Award for his efforts to mentor undergraduate and graduate students in research. During his lecture, Blaney emphasized the impact of his own mentors on his mentoring approach, and said that his mentors Arup SenGupta (Lehigh University), Desmond Lawler (University of Texas at Austin), and Lynn Katz (University of Texas at Austin) changed his life. Blaney has incorporated their advice and his own experiences into his mentoring approach at UMBC. “Seeing my students succeed is the most gratifying aspect of being a professor,” he says.

Even though the event could not be held in person due to the COVID-19 pandemic, many of Blaney’s students were able to attend the virtual lecture. Blaney noted that the presence of his students made the celebration even more special. Upon receiving the Braude Award, Blaney emphasized that “this is our award” to his students. Mamatha Hopanna Ph.D. ‘22, environmental engineering, who conducts research in Blaney’s lab, the virtual lecture. “I am amazed by how much he cares to support each student’s learning style and needs. I have always felt his sincerity, commitment, and enthusiasm towards his students’ success,” she said. “It is so encouraging to see Dr. Blaney celebrate each of his achievements as our achievements. I, personally, aspire to be a mentor to inspire and motivate other students in the same way as Dr. Blaney has inspired me.”

The Braude Award honors professors from institutions in Maryland who involve students and postdoctoral fellows in exceptional research in particularly notable ways. The award was created in memory of George Braude, who served as chair of the Maryland section of the ACS.

This latest award follows several other honors which have enabled Blaney to further his innovative research. In 2017, Blaney received an NSF CAREER Award, which focuses on how contaminants of emerging concern impact the environment. Later that year, he was recognized by the Maryland Science Center with the 2017 Outstanding Young Engineering Award.

Blaney is the third UMBC faculty member to receive the Braude Award. In 2006, then-UMBC professor Catherine Fenselau, former chair of chemistry and biochemistry, received the award. Michael Summers, distinguished professor of chemistry and biochemistry and Robert E. Meyerhoff Chair for Excellence in Research and Mentoring, received the award in 2010. Summers is internationally known for his HIV research and his work with UMBC’s Meyerhoff Scholars Program.