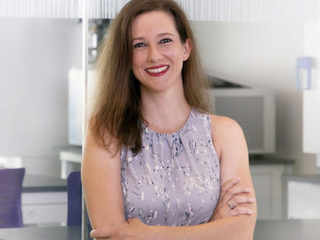 Tara LeGates, assistant professor of biological sciences, has been named first runner-up for the prestigious, international Eppendorf and Science Prize for Neurobiology, a competition for researchers under 35 that recognizes outstanding neurobiology research. Science published her winning essay today, which describes LeGates’s research for a 2018 paper published in Nature.

Experiments for her work took more than four years and resulted in groundbreaking discoveries about the neurological basis for reward-seeking behavior. LeGates’s work may pave the way for new, more targeted treatments for mental health disorders including depression and addiction.

“I’m really interested in how the brain integrates a lot of different kinds of information to regulate complex behaviors, such as seeking rewards,” LeGates says. “A number of different processes all have to come together to successfully obtain rewards, which requires that different brain regions communicate with each other.”

LeGates’s 2018 paper explored the details of a specific communication pathway between two brain regions: the hippocampus and the nucleus accumbens. She found that this particular synapse (a connection between the two) is pivotal to reward-seeking behavior in mice. This mechanism is highly conserved across species, including in humans. A neuron in the nucleus accumbens, from LeGates’s research. Image courtesy Tara LeGates.

When reward-seeking behavior goes into overdrive, addiction can occur—where an individual continually seeks a particular reward, even if there are harmful consequences. If reward-seeking behavior is inhibited, however, depressive symptoms can result. That can manifest as someone no longer enjoying activities they used to find rewarding, such as spending time with friends or exercising.

The most common treatments for depression rely on drugs that indirectly target neurons involved in reward seeking, LeGates explains. Because they work indirectly, these drugs often take weeks to show any effect. They can also upset the chemical balance elsewhere in the brain in undesirable ways.

A better understanding of the specific brain regions and synapses involved in reward seeking could make feasible much more direct forms of treatment, such as targeted deep brain stimulation or, eventually, new medications. That kind of advance could bring relief to more people, more quickly, and avoid some of the most dangerous side effects of current treatments.

“There’s this increasingly popular hypothesis in the field that the strength of synapses, like ones between the hippocampus and the nucleus accumbens, are really what underlies depression,” LeGates says. “In depression, you have a weakening of these synapses, and antidepressants currently on the market act indirectly to restore them. By identifying the specific synapse involved, it would allow for a more targeted approach to treating disorders like depression.”

Peeling back the layers

Moving forward, LeGates would like to further explore the way the brain works to regulate reward-seeking behavior. Her Nature paper found that several things have to go right for a mouse to find something rewarding, remember where it experienced the reward, and then seek it out again, but the relationships between the components of the rewards-seeking process are still a bit murky. For example, a stimulus such as the company of a fellow mouse may be rewarding in the moment. If the connection between the nucleus accumbens and the hippocampus is blocked during the interaction, however, the mouse won’t remember where it had that rewarding experience. On the other hand, if that brain connection is stimulated even without the presence of a physical reward, the mouse will prefer the location where the brain stimulation occurred.

“The nucleus accumbens receives input from the hippocampus, and that’s important for conveying those contextual cues,” LeGates says. Her further work will continue to tease out the complexities of reward seeking.

In addition to her contributions to neurobiology, LeGates is committed to creating an inclusive lab environment for UMBC students.

“I’m working on building a really strong research program where students are flourishing,” she says. Her work as a researcher and educator focuses on “not only making significant scientific contributions, but building young, independent scientists” who can both have a positive experience and achieve their goals.

LeGates joined the UMBC faculty in 2019. “Overall, UMBC, and especially the biological sciences department, has been incredibly supportive ,” she says. “I am truly grateful to work in such a wonderful environment amongst amazing colleagues and brilliant students.”

One of those colleagues, Phyllis Robinson, professor of biological sciences, is a champion for LeGates and is confident she will continue to make a major impact in her field. “UMBC is fortunate to have such a rising star in the field of neuroscience. Tara did groundbreaking work as a graduate student at Johns Hopkins University and as a postdoc at the University of Maryland School of Medicine,” Robinson says. “I am certain she will bring the same intelligence and insight to her own lab at UMBC.”