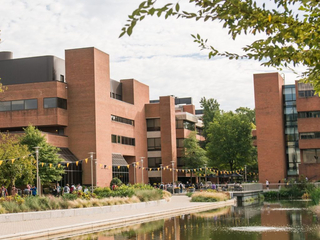 Kathleen Hoffman, professor of mathematics and statistics, thrives on solving puzzles. She has spent her career working to create and refine mathematical models of notoriously complex biological systems. For the last decade, she and colleague Katharine Gurski at Howard University have been working together to model the spread of HIV. Now, the pair has received two new grants to support their work.

Funding from the National Science Foundation (NSF) will support their efforts to improve the model of how HIV spreads between people. A grant from the Center for Undergraduate Research in Mathematics (CURM) will support work to model how HIV infects cells in the body and develops resistance to drug treatments.

Pieces of the puzzle

The CURM grant will support undergraduates in Hoffman and Gurski’s labs to model how HIV behaves inside the body. In particular, they want to know how it responds to a common treatment known as highly-active anti-retroviral treatment (HAART).

“Some strains of HIV are less likely to respond to treatment,” Hoffman says, “and when patients don’t follow the treatment regimen carefully, that can also lead to resistance.” If a person’s HIV becomes resistant to their current treatment, they can more easily pass the infection to others. So a better understanding of the presence of drug resistance in the population is critical to building accurate population-based models of HIV spread. “How can you expect people to enjoy research, if they don’t know what it is?” Hoffman asks. She says being accountable to students and their projects also helps keep her own research on track. “It accomplishes small but meaningful things toward my research that I might not do if I wasn’t working with a student,” she says. “They each contribute their own piece of the puzzle.”

Hoffman and Gurski’s previous collaboration on an HIV-transmission model included factors like demographic information and sexual behavior. Through their new NSF grant they will make the model more precise by incorporating two more major factors. They will account for the role of long-term relationships and usage of PrEP, a drug that reduces one’s risk of contracting HIV when taken every day. Hoffman’s Ph.D. student, Sylvia Gutowska, is taking the lead on the PrEP modeling.

But the analogy between people and molecules breaks down when you start looking at complex human behaviors. For example, long-term partnerships dramatically reduce the likelihood of risky encounters between individuals.

Using PrEP adds more complexity. When taken regularly, PrEP reduces the likelihood of a person passing the disease to someone else. But research shows that if someone is taking PrEP, they are also more likely to behave in riskier ways. And if they forget to take their daily dose, they’re at higher risk again temporarily. These factors “make the modeling way more complicated from a mathematical perspective,” Hoffman says. Incorporating those two parameters will be the primary work of the NSF grant.

Hoffman and Gurski also want to validate the new model they develop. To do that, they’ll give the model real data from 2005 on disease rates, and then see how well it is able to predict disease rates a few years later (e.g. 2010 and 2015). Because these data already exist, they’ll be able to compare the real data to the model’s predictions.

Once they have an upgraded model, the researchers can test individual parameters in the model to see which would have the biggest effects on the level of disease in a population. This can then inform public health decisions.

“By measuring the sensitivity of the parameters, it’s kind of like looking for the biggest bang for your buck in terms of resource allocation,” Hoffman explains. “For instance, if you have money to put toward an education campaign, should you put it toward making sure people take PrEP diligently? Or will it have more of an impact if you put it toward promoting condom use? Which will have a bigger impact on decreasing the amount of disease in society? That’s the kind of question this kind of work can usually answer, if the model is accurate.”

But even figuring out what the parameters are to begin with can be very difficult. The work goes way beyond math into HIV biology and even the sociology and psychology behind people’s behavior and relationships.

It’s hard, “but what I like about science and research is the fact that I’m not constrained by siloes. Sometimes I have to go read literature in the psychology and sociology fields, and I have to read biology papers that I struggle through,” Hoffman says. “That’s why I like it, because I never know what I’m going to need to learn next.”