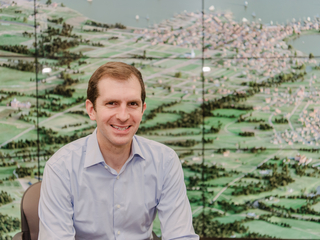 To: The UMBC Community
From: Karl V. Steiner, Vice President for Research
Re: Dr. Don Engel – Promotion to Associate Vice President for Research Development
I am delighted to announce that, effective June 1, 2020, Dr. Don Engel has been promoted to Associate Vice President for Research Development and will assume the role of Director of UMBC’s Center for Space Sciences and Technology, which Dr. Engel has been leading in an interim capacity since November 11, 2019.
After completing postdoctoral training at the University of Pennsylvania and at Johns Hopkins University and serving in various roles with the U.S. Congress and several federal agencies, Dr. Engel joined UMBC in 2011 as Assistant Vice President for Research, with primary responsibility for research development. Dr. Engel holds appointments as an affiliate assistant professor in the departments of Computer Science and Electrical Engineering (COEIT); Physics (CNMS); and the Imaging Research Center (CAHSS) and leads an active research group – the Assistive Visualization and Artificial Intelligence Lab (AVAIL). In his nine years since joining UMBC, Dr. Engel has been leading many of the internal research pilot programs, external relationships, and strategic initiatives, which have contributed to UMBC's growing national reputation for research, scholarship, and creative achievement over the past decade.
In his new roles, Don's responsibilities will include leadership of the Office of Research Development (ORD), several of UMBC's core research facilities, including the Pi Squared Visualization Facility, and the Center for Space Sciences and Technology (CSST), UMBC’s part of the CRESST II Cooperative Agreement with NASA Goddard, and one of our three major Cooperative Centers with NASA. In FY 2020 CSST contributed $8.5 million to UMBC’s research expenditures and is a major reason for our current ranking as #13 among U.S. Colleges and Universities in annual funding support from NASA.
I am very thankful for Dr. Engel's energy and experience and look forward to his continued leadership in developing new ways of supporting UMBC's growth in all aspects of research, scholarship, and creative achievement.
Please join me in congratulating Don on this well-deserved recognition and his new roles at UMBC.
Tags: ovpr-news-2020
4 Comments (requires login)