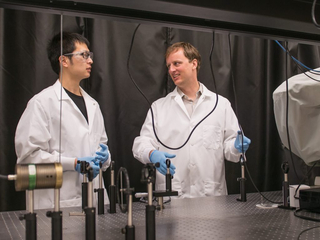 By combining their expertise in physics and chemistry, Matt Pelton and Marie-Christine Daniel are working toward the next big leap in computing. Both are engaged in photonics research, which is “the idea of using light—photons—to do information processing instead of using electrons like you do in electronics,” explains Pelton, associate professor of physics at UMBC.

Using light rather than electrons, as in fiber-optic telecommunication cables, is “faster, and you can send a lot more information,” Pelton says. However, no computer today runs exclusively on photons. “The huge pipeline of data coming down optical fibers all has to be converted to an electrical signal and then distributed to all the different processors in the computer. That’s the big power and time bottleneck,” Pelton says.

“If you could do as much of the function of the computer chip as possible using photons instead of electrons, then you would be able to use less power and do things more efficiently,” he says. “So there’s a big push to try to bring photonics down to the single chip scale.”

That’s where this interdisciplinary duo comes in. They’re working to develop a unique combination of existing chemical structures to enable photon-driven computer functionality even in the computer’s most fundamental building blocks. A new three-year grant from the National Science Foundation will enable Pelton and Daniel to make faster progress on their project and involve more students. A new kind of switch

Daniel and Pelton’s novel technique depends on being able to reliably create very specific chemical structures. By binding two types of known structures in a particular arrangement, they can create a kind of on-off switch.

At its most basic level, a computer is just a lot of these switches. Whether they use ones and zeros, light and dark, or something else, the pattern of the switches encodes information. The new kind of switch that Daniel and Pelton are devising is different from what computers use now, because it relies on photons rather than electrons.

The light-driven structures Daniel and Pelton are working to build are made of quantum dots and metal nanoparticles. Quantum dots are tiny crystals only about 20 atoms in diameter. They’re made of semiconductor elements, similar to the silicon that powers electronics, and they can be designed to emit certain wavelengths (colors) of light. They’re even used in some televisions. The metal nanoparticles are larger, usually a few thousand atoms in diameter. They also appear as different colors based on the light they reflect and absorb, but they don’t emit their own light.

Through computer simulations, Pelton and Ph.D. student Vijin Veetil have demonstrated that by binding two rod-shaped nanoparticles (“nanorods”) and a quantum dot together in a specific way, their interaction can produce a structure that allows light to pass straight through both the dot and particle, when it would normally be scattered. Transmitting the light creates a transparent state rather than an opaque one. That switch from transparent to opaque, which can be controlled by an external beam of light, is exactly the kind of switch that could encode information in a computer. Matt Pelton in the lab. Photo by Marlayna Demond ’11 for UMBC.

Getting it just right

For this to work, Pelton and Daniel need to successfully construct molecular structures consisting of a single quantum dot stuck between two nanorods.

“It needs to be that configuration,” says Daniel, associate professor of chemistry and biochemistry, who is bringing on chemistry Ph.D. student Chanda Lowrance to help her tackle this project. “The quantum dot alone, or the nanoparticles alone, will not induce the transparency effect.”

“That’s essentially the goal of this project—to take these structures from a cartoon to something we can actually make,” Daniel says. “And making this is not easy.” If Daniel, Pelton, and their students can do it, though, they’ll be setting the stage for a revolution in computing.

From random to reliable

Previous research has shown that it’s fairly straightforward to get the nanoparticles and dots to clump together in groups. “But we need to get just one of them. And we don’t want it to bind just anywhere. It has to be right there,” Pelton says. “That’s the big challenge.”

A procedure that allows metal particles and dots to bind together randomly does result in a very small number of structures in the desired configuration. When scientists tested those lucky few for the transparency effect, they matched results predicted by Pelton’s simulations, proving this technique can work.

This is what the team is working on now. Their goal is that “by the end of the project we’ll have shown that we can make these things reliably, in larger numbers, and that we can use them as an on-off switch,” Pelton says. Marie-Christine Daniel (left) and Renee Suzich, an undergraduate from St. Mary’s College of Maryland at UMBC for a summer research experience, at work in Daniel’s lab. Photo by Diane Zeenny.

The power of teamwork

“I didn’t know if this was going to work when we started,” Pelton says. But considering their progress so far, and the impact this new funding will have on accelerating their work, today Daniel and Pelton are optimistic about the future of light-based computing and other applications for their joint research.

While the work poses significant challenges, “of course it’s a big opportunity, too,” Pelton says. In addition to the duo’s goal to create light-driven computer chips, there could be other scenarios where it would be beneficial to combine nanoparticles. Different configurations could generate new and useful physical and chemical properties for all kinds of applications.

Daniel and Pelton recognize the importance of their collaboration for the success of this work. Pelton’s theoretical and simulation expertise as well as his ability to do single-particle measurements, and Daniel’s in-depth knowledge of the chemistry and ability to find a way to make specific structures, have all been critical.

“This is not something that any physicist or chemist could do alone,” Daniel reflects. “It takes both.”