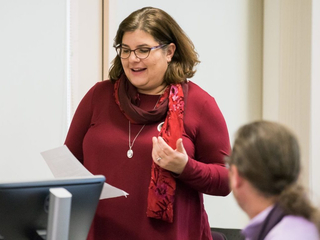 “Historians know that the Confederacy ran out of food by the end of the Civil War, and it shouldn’t have because it was an agricultural society,” says Anne Rubin, professor of history at UMBC. “I want to understand the causes of this, and the lived experience of different social classes during this time.”

Rubin has just received a 2020 – 2021 National Endowment for the Humanities (NEH) fellowship to write a book examining how food shortages in the South affected wealthy and poor people, both white and black, during and after the Civil War, ultimately shaping Southern foodways. A resurgence in the popularity of Southern foods inspired Rubin to take a closer look at Southerners’ experiences with food during the Civil War. “There is a real nostalgia when people talk about heritage pork and heritage grains,” she reflects. “I want to cut through that. This kind of reverence for the past does not include a conversation of who was preparing the food or any of the racialized aspects of Southern cooking.”

Rubin will research the differences between rural and urban food scarcity, and how that scarcity was felt by people at different places in society. There were white elites that for the first time had to manage with ingredients they deemed subpar. There were also enslaved people who had to continue cooking for elite whites and for themselves with less and less food.

Rubin will also explore the experiences of poor whites, who may have already had to adjust their diets drastically as resources waned, and the 500,000 African Americans who fled to the Union Army, where they were given inadequate rations and suffered from sickness and malnutrition. All of these changes influenced the strategies Southerners used to modify traditional recipes, replacing inaccessible ingredients with alternatives. “A lot of the scarcity has to do with questions of supply,” explains Rubin. “Research shows that wealthy people in the South who were used to cooking with white flour and white sugar began to make substitutions with ingredients usually reserved for the poor, like molasses and cornmeal.” Recipe adaptations were recorded in homemade recipe books, letters, diaries, relief receipts, and ration logs from army camps.

Her research thus far also shows that the adaptations made by elite white Southerners became a way to show allegiance with the Confederacy. Southerners accepted not being able to have coffee and were willing to make other sacrifices as long as it meant the Confederacy could keep fighting.

“These responses create a narrative of patriotism and nationalism around food,” shares Rubin. “There is an intention of using food and the history of food as a way to express loyalty to the Confederacy. But the experience of African Americans, poor whites, and elites varied drastically.”

Two key questions Rubin hopes to answer focus on the management of food: Why did an agricultural society struggle to feed its citizens? And how did people survive the compounding effects of the 1867 famine that followed the Civil War, caused by crop failure?

“Part of my research is looking at the response of the Freedmen’s Bureau to feed African Americans. I also explore the work of elite Northerners providing relief,” explains Rubin.

Next, she will travel to archives in North Carolina, Louisiana, and other states in the South to piece together a social network analysis. This will help her better understand those affected by food scarcity in the South, those who provided help, who was receiving help, and what kind of help they were receiving. Rubin teaches a Civil War and Reconstruction class as well as two Southern history classes—one that goes through the Civil War and one that starts with emancipation. She wants to share with her students the research methods she is using to develop this book, to broaden their sense of how we can learn about the past by looking beyond military history.

“I research people who don’t always leave letters or diaries, but can be found through a receipt for the food they were given,” says Rubin. “I want students to think of food history as another tool in the historian’s toolbox—that you can look at a recipe and you can piece together a whole social network from it.”

This approach to history is also reflected in Rubin’s work as associate director of UMBC’s Imaging Resource Center, known for providing visually immersive websites and exhibits that bring a greater understanding to historical events.

Rubin’s award is one of several that faculty in the history department have received this year, honoring and advancing their scholarship in a broad range of subject areas.

Constantine Vaporis will soon be a fellow in residence at the Institute for Advanced Study in Princeton, New Jersey. Vaporis is both a professor of history and director of Asian studies. He will research portraits of Samurai in early modern Japan.

Christy Chapin, associate professor of history, has won an American Council of Learned Societies fellowship for her research on flexible finance. She previously received a Kluge Fellowship to study the banking and finance collections at the U.S. Library of Congress.