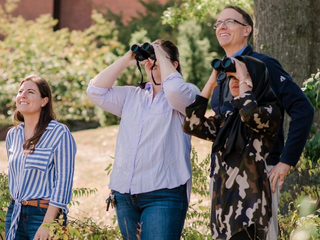 In the 1930s, famed biologist Ernst Mayr became the first to study Pacific Robins. Based on his observations of the robins and other birds on Australia and its outlying islands, he developed foundational concepts that continue to inform the study of evolution. He took copious notes on the birds’ physical characteristics, behaviors, and habitats. Always, he described the robin populations as a single species, albeit with significant variation from island to island.

Ernst Mayr made lasting contributions to evolutionary biology—but like most scientists, he wasn’t right about everything.

Anna Kearns is a former UMBC postdoctoral fellow now at the Smithsonian Institution’s Conservation Biology Institute. With her UMBC postdoc advisor Kevin Omland and other colleagues, she has conducted new investigations into the relationships among Pacific Robins on various islands using many of the same bird specimens Mayr himself used. The difference is, “He would have mainly been just using his eyes” to compare specimens, Kearns says. She and her colleagues have had the advantage of major advances in technology since Mayr’s time. Anna Kearns in the collections of the American Museum of Natural History in New York. These robin specimens were collected almost 100 years ago by Ernst Mayr and others, and have proven invaluable to the modern study of the birds’ evolution. Photo courtesy Anna Kearns.

Kearns has built on Mayr’s work by using techniques like DNA sequencing and spectrophotometry, which quantitatively compares the hue, brightness, and saturation of feathers. She has come to a more nuanced understanding of the relationships between, say, a robin on Fiji and one on the Solomon Islands.

As a result of this research, Kearns and colleagues from UMBC, the Australian National Wildlife Collection, Australian Centre for Ancient DNA, and the Smithsonian National Museum of Natural History are making bold new claims about the relationships between these birds. In a 2015 paper in Conservation Genetics, Kearns demonstrated that robins living on Norfolk Island, directly east of mainland Australia, are a distinct species from the rest. A new paper in the Journal of Avian Biology published this month indicates two more unique species—one that inhabits the Solomon and Bougainville Islands, and another that lives on Fiji, Vanuatu, and Samoa.

The new work demonstrates just how much is still unknown about avian biodiversity. “Even in this well-studied group of birds, that’s been a textbook example since 1942, we did not really know what the units of biodiversity were,” says Omland, professor of biological sciences at UMBC, and senior author on the new paper. Kevin Omland, second from right, discusses research with a few of his students. Photo by Marlayna Demond ’11 for UMBC.

Understanding those “units of biodiversity” is critical for conservation. When all the Pacific Robins and mainland Australia’s Scarlet Robin were considered a single species (a single unit of biodiversity), the loss of the birds on one or two islands would be unfortunate, but not necessarily very impactful. If those birds were actually the only remaining members of a unique species, however, the same loss becomes catastrophic.

“What Anna’s work is showing is that the bird populations on these islands have very distinctive traits,” Omland adds, “so just knowing what the biodiversity is that we want to conserve is super important.”

The team’s work indicates that all the Pacific Robins are descended from an ancestral Australian population where males were brightly-colored and females were dull-colored. But as small groups of robins colonized the outlying islands, the population on each island took its own evolutionary path. Today, some island groups still maintain the bright male and dull female pattern, but on other islands both sexes have evolved bright coloration. On other islands, both sexes have evolved dull coloration. This figure from the new paper visually explains the location and coloration patterns of the different robins that Kearns, Omland, and their colleagues studied.

“When you look at the genetics, you find two distinct lineages” leading from the common ancestor to all the island populations that exist today, Kearns says. “So that means these patterns have evolved independently multiple times.”

Kearns and Omland think the changes have more to do with random forces than evolutionary adaptation. “If we flipped two coins, this is about what we’d expect,” Omland says.

For example, the pattern an island’s population ended up with could depend on the color of the individuals that happened to get blown onto that island initially. Also, in a very small population, the random way genes are redistributed from generation to generation can have a significant impact—as much of an effect or more than natural selection.

Kearns and Omland are both excited to have the opportunity to suggest names for the new species they’ve identified. Kearns suggests “Mayr’s Robin” for the Fiji/Vanuatu/Samoa population, in honor of Ernst Mayr’s pioneering study of these birds. These robins are in the American Museum of Natural History in New York City, where Kearns conducted much of her research. Some of the handwritten notes are from Ernst Mayr himself in the 1930s. Photo courtesy Anna Kearns.

But their contribution to ornithology is more than a name. “Because these birds are all on very small isolated islands, and Pacific birds are often on many, many, many isolated islands, collecting is very difficult. So there haven’t actually been that many comprehensive studies,” Kearns says. Revealing the complexity of the relationships among these robins adds much-needed information to the field. It also raises the prospect that other birds—especially those on islands—might have undergone similar, as-yet-unstudied, evolutionary processes.

The work is a unique blend of past and present. “You really wouldn’t be able to do this study without using these old collections,” Kearns says. At the same time, discovering the new species also wouldn’t have been possible without modern techniques.

“It’s kind of like detective work in a way,” Kearns says. “I feel like there’s just so much more we need to know about it. But we feel like we have made a big step forward.”

Banner image: Kevin Omland (rear) goes birdwatching at UMBC’s Library Pond with a group of his students. Photo by Marlaynd Demond ’11 for UMBC.