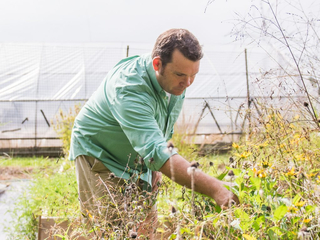 The Baltimore Ecosystem Study (BES) is one of only two urban Long-Term Ecological Research projects initially funded by the National Science Foundation, and this year it turns 20. When the BES was founded in 1998, “The field of urban ecology basically didn’t exist,” says Claire Welty, director of UMBC’s Center for Urban Environmental Research and Education. Since then, the field has flourished, in no small part thanks to dedicated researchers in Baltimore.

The BES has succeeded in compiling massive datasets on the Baltimore region’s watershed, ecology, and sociological issues related to the environment. The extent of these data are unparalleled anywhere else in the world. That makes the study “an international icon,” Welty says, and its wealth of fully public data provides “a rich resource for people to use in their research.”

“We’re living in a rapidly changing environment,” says Andy Miller, professor of geography and environmental systems (GES) and chair of the department when the study was founded. The long-term data the BES collects allows researchers to document “how systems change in response to what we do” on and to the landscape, Miller explains. That includes large-scale development of previously undisturbed ecosystems. If we can learn enough, Miller says, that knowledge may create “opportunities to mitigate the effects of urbanization.” Moving on those opportunities requires collaboration with policymakers at many levels. Over the course of the BES, its researchers have gained the trust of local and state officials who have found BES data helpful in informing policy discussions, says Miller. Employees from the Maryland Department of the Environment, Department of Natural Resources, and others regularly attend BES quarterly meetings. At the federal level, scientists and managers from the USDA Forest Service's Baltimore Field Station and from the US Geological Survey's MD-DE-DC Water Science Center, both located at the bwtech@UMBC Research & Technology Park, have been long-term partners contributing to and benefitting from the BES program.

Beyond the flood of data and influence on policy, “The impact of the BES on research infrastructure and training in Baltimore has been so important,” says Miller. The BES is headquartered on UMBC’s campus, and the presence of the program here has helped faculty successfully apply for funding to support related projects. It even enabled the launch of UMBC’s graduate program in GES by facilitating funding of the program’s first students through the NSF’s Integrative Graduate Education and Research Traineeship program.

The education component of the BES extends far beyond the graduate level. Its education arm works with K-12 students throughout the Baltimore region to teach them about their local ecosystems and the importance of caring for the environment, with the goal of raising a generation of young people committed to environmental stewardship. Today, “More than half of the world’s population lives in cities,” says Chris Swan, professor of GES and a BES scientist, “and understanding how these environments function from the natural, physical and social science perspectives has never been more important.”

Plus, the effects of climate change don’t necessarily show up immediately, but can accumulate over time, explains Welty, “so it’s important that the data collection continue,” especially as climate change accelerates.

The BES is unique because it “brings scientists, stakeholders, policy makers, and students to the table on a regular basis to perform research, interpret results and understand outcomes,” says Swan. This level of collaboration on such a large scale enables BES to have a substantial impact, locally and in other urban areas around the world. This impact can be felt in the well-being of urban residents, he adds, “none more so than the people of Baltimore.”