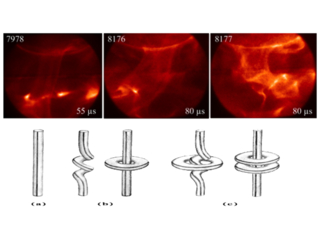 Dr. Carlos Romero-Talamas, a professor in the UMBC Department of Mechanical Engineering, has been recognized with a DARPA Young Faculty Award (YFA) for his research in computational models of nuclear fusion technology.
The YFA program exists "to identify and engage rising research stars in junior faculty positions at U.S. academic institutions." Of receiving this award, Dr. Romero-Talamas said "This allows us to explore a type of self-organized magnetized plasma, the spheromak, for operating modes that would lead to a thermonuclear fusion reactor design with significant reductions in size, cost, and engineering complexity over the leading concept, the tokamak."
Nuclear fission power plants are in common use around the world and operate by splitting apart relatively heavy atoms, producing lighter elements. Fusion works in the opposite way, by deriving energy from fusing atoms together to form heavier elements. All stars, including our Sun, produce energy from fusion. Stars are able to do this because massive amounts of gravity compress a star's matter. Creating the conditions for fusion within a human-engineered device on Earth could allow humanity to transcend our dependence on fossil fuels. Fusion energy research has led to several types of devices being proposed, such as tokomaks, spheromaks, and stellerators. Dr. Romero-Talamas is working to advance computational models which predict the flow of matter within spheromaks. Compared to other fusion energy schemes, the spheromak offers a simpler vessel shape, such as a cylinder, and the plasma is contained by internally created magnetic fields, avoiding the need for expensive external coils linking the plasma.
[Picture: The top row shows images of plasma kinks. The bottom row illustrates helicity buildup.]
Tags: ovpr-news-2014
2 Comments (requires login)