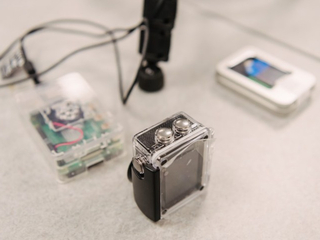 From surveillance tools to autonomous machines, countries around the world are ramping up their military artificial intelligence (AI) assets. Such robust technologies are necessary to protect the United States from surprise attacks, which occur these days not only on the ground, but also on the cloud.

Advancing AI-based autonomous systems for military use will be the goal for a team of UMBC researchers that has recently been awarded a $20-million subcontract. UMBC will partner with the University of Maryland, College Park (UMD), and the DEVCOM Army Research Lab (ARL) on the $68-million, five-year endeavor, which ARL is funding. The goal is to strengthen army AI technology so it is able to meet the demands of today’s national defense. “The question we’re trying to solve is: Can we design and develop tools, techniques, algorithms, software, and hardware that can work autonomously and make their own decisions, but also collectively, interfacing with human decision makers?” says UMBC’s principal investigator Aryya Gangopadhyay, professor of information systems. “The landscape of war is changing, and we must build systems that can make human-like decisions in real time and under real-world pressure.”

The project, AI and Autonomy for Multi-Agent Systems (ArtIAMAS), aims to advance science and technology around three core research areas: collaborative autonomy; harnessing the data revolution; and human-machine teaming. UMBC’s role in the project will center on the second and third research thrusts.

More specifically, the UMBC team will develop solutions for AI-based networking, sensing, and edge computing — which brings data storage and computation closer to a location — for battlefield Internet of Things (IoT). This will allow them to deliver secure, effective, and resilient U.S. Army assets including AI systems related to search-and-rescue, surveillance, robots and machinery, and augmenting humans in performing decision-making tasks. Sensors that will be used for research.

“As one of the research institutions in the University System of Maryland, we are delighted with this exciting next step in our statewide partnership with our colleagues at UMD and at the Army Research Lab,” says Karl V. Steiner, vice president for research at UMBC. “Artificial intelligence is one of the key technologies in the ongoing transition to autonomous systems, both in the defense and civilian sectors, and it does take researchers from a variety of backgrounds to innovate and develop the most promising solutions. This alliance builds on the expertise and commitment of many of our colleagues.”

In the battlefield, there are soldiers with body cameras, guns with sensors, as well as ground-based and airborne machines operating in rough and volatile terrains. Retrieving data and making decisions from these multi-model sources can be difficult, especially in challenging networking conditions. Understanding and developing adaptable cross-domain solutions for these environments will be at the forefront of the work of co-principal investigator Nirmalya Roy, associate professor in information systems. With the work set to begin in mid-May 2021, the UMBC team will initially include more than eight researchers from the departments of information systems and computer science and electrical engineering, as well as scientists and engineers from the ARL. The Center for Real-time Distributed Sensing and Autonomy (CARDS) will lead the research being conducted by UMBC faculty.

Eventually, the team will grow to nearly 50 researchers, and future projects will include other University System of Maryland institutions. Together, the group will publish fundamental research and identify similar and cross-cutting research endeavors, improving collective information-sharing. “The cross-disciplinary nature of this project is well-suited to our College, which brings together computing, engineering, and information systems faculty and student researchers. The project team includes a significant number of the exceptional faculty we have recruited through recent hiring made possible through our state’s support,” says Keith J Bowman, dean of UMBC’s College of Engineering and Information Technology.

While the work will undoubtedly improve military AI, it will also enhance AI research in other domains. A goal of the project is to establish a long-term center with a vision of advancing AI-based autonomy. Nirmalya Roy, left, and Aryya Gangopadhyay working together in the lab.

“This is an opportunity for UMBC to bring together talented researchers from across departments to participate in fundamental, and potentially groundbreaking, research,” says Gangopadhyay. “To make a big impact in the research space, you need long-term, multi-institutional partnerships and collaborations. Working with the University of Maryland, College Park and the Army Research Lab will allow us to collectively advance AI in the military space.”

Written by B. Rose Huber for UMBC News.