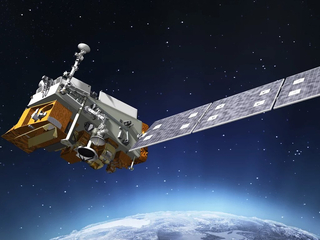 A new analysis based on 16 years of observational data confirms that humans are heating the planet—a fact that had previously been inferred from climate models but not yet shown through direct evidence. Ryan Kramer, assistant research scientist at UMBC’s Joint Center for Earth Systems Technology, led the research, which was published in Geophysical Research Letters.

Kramer and colleagues analyzed atmospheric data collected continuously by NASA’s CERES mission from 2003 to 2018. They were able to show that a portion of the energy being trapped inside Earth’s atmosphere and causing warming is directly attributable to human activities.

The new analysis, and the novel technique Kramer employed to complete it, will create opportunities to compare and improve climate models and to track climate change mitigation efforts in nearly real time.

This animation visualizes Earth’s energy balance. Incoming radiation (energy) is presented in yellow, and outgoing radiation is in red. The human-contributed parts of the cycle, which Ryan Kramer’s study isolated from the rest, are featured from 15 seconds to the end. Animation by Adriana Manrique Gutierrez at the NASA Conceptual Image Lab, and a more thorough explanation of the animation is here.

Many factors, one main culprit: Humans

CERES tracks changes in radiation (energy) entering and exiting Earth’s atmosphere, but doesn’t parse out exactly what’s causing the changes. Kramer did that with a technique called “radiative kernels.” Atmospheric scientists often apply these “kernels” to climate models, he says, but they’ve used them with observational data very rarely, and never before in this context.

A kernel can tell you how much of the total radiation change is due to a particular factor, such as the temperature, clouds, brightness of the Earth’s surface (ice versus forest, for example), or the amount of water vapor in the atmosphere. Kramer subtracted out all the radiation changes even possibly attributable to natural changes.

“We knew the radiative forcing had to be in the CERES observations somewhere, but this was the first time we’ve really been able to pull it out, globally, and over time,” Kramer says. Many other factors have measurable effects on the overall radiation budget. Significantly, though, over the 16-year study period, Kramer says, “As far as we can see, the long-term trend in the CERES record seems to be almost entirely accounted for by the radiative forcing.” “We tend to focus on the uncertainty in the feedbacks,” but there’s also uncertainty in how the different models simulate radiative forcing, Kramer says, “which is underappreciated.”

“We can use the observations to evaluate the models,” Kramer adds. The models that most closely matched the CERES observations may be more likely to accurately forecast future climate change.

Beyond determining which models were most accurate during the study period, “We can start digging into the models and see why some of the models don’t agree with the observations,” he adds. Understanding precisely what in the models causes them to disagree with real-life observations could enable improvements.

“It’s never that easy, because observations also have their uncertainties,” Kramer says, “but I think it’s a good first step toward really checking the radiative forcing in these models and understanding why they differ.”

A supercomputer model of how carbon dioxide, the gas currently having the greatest effect on climate change, swirled through the atmosphere in 2006. Visualization by William Putman at the NASA’s Scientific Visualization Studio.

What’s helping and what’s not

Kramer describes the overall result—that humans are affecting the climate—as “the least surprising result in climate science.” But the fact that scientists could even detect the human-caused radiative forcing is something to be proud of, he explains.

The trend in radiative forcing over time “is an important change, but it’s often hidden behind the large fluctuations that we see on a year-over-year basis caused by El Niño or other natural processes,” he says. “The fact that our instruments can even measure it is an accomplishment.”

Perhaps even more impressive, new atmospheric data from CERES becomes available in nearly real time. Combine that with the radiative kernel technique, and you have a recipe for tracking Earth’s energy budget in a way that could immediately inform global emission reduction goals.

“I think radiative forcing could be used to track how things are going—how our actions are making climate change worse, or, eventually, how our mitigation efforts are counteracting the energy imbalances we’re causing,” Kramer says. “Radiative forcing will be another tool in the toolbox for monitoring our climate and having a productive discussion about what’s helping and what’s not.”

Banner image: A rendering of the NOAA-20 satellite, which is currently carrying instruments for the CERES mission. Image courtesy of NASA.