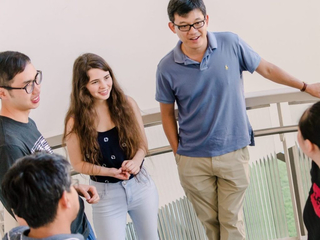 “It is an area of pride for us to make it into the top 100,” says Karl V. Steiner, vice president for research at UMBC. “We’ve now had year-over-year growth in the last six years. We grew our expenditures by 24 percent during that time—a very significant increase.” Karl Steiner (left) and Aryya Gangopadhyay at the Pi Squared opening in 2018.

“The expenditures are one key method to get a sense of our faculty and students’ research productivity,” Steiner notes. “These rankings also help us see how UMBC is progressing in meeting our public impact research goals.”

UMBC continues to fortify its relationship with NASA, ranking #15 overall in NASA funding (#11 amongst public universities). Currently, more than 170 researchers who are UMBC faculty members and research scientists collaborate with NASA Goddard. Zhibo Zhang discusses an image collected via satellite with his lab group.

Funding from NASA has contributed to many UMBC-led scientific ventures, including the work of Zhibo Zhang, associate professor of physics.His Aerosol, Cloud, Radiation, Observation, and Simulation (ACROS) research group analyzed data collected from instruments on aircrafts and NASA’s orbiting satellites such as CALIPSO, CloudSat, and MODIS.

They sought to better understand how tiny particles in the atmosphere, such as aerosols and cloud droplets, interact with each other and the radiations from the Sun and Earth, and how these interactions influence our weather and climate systems.

Explorations in the urban environment Human influence on groundwater is one of the many issues they are exploring. “Groundwater is a hidden resource that feeds streams and rivers. In cities, people are typically not using wells for water consumption but groundwater is part of the hydrologic cycle that affects ecosystems,” Welty explains. “Streams lead to rivers and rivers go to potable water intakes for cities, so it’s all connected.”

Despite the COVID-19 pandemic slowing down many research initiatives, Welty and Miller have continued to move their work forward. The team has begun conducting field research that has included subsurface imaging of project field sites, collecting water samples from each of the targeted sites, and deploying water quality sensors. Welty is expecting to bring her first Ph.D. student onto the research team by this fall.

Tamra Mendelson, professor of biological sciences, received a $2.8 million NSF Research Traineeship (NRT) grant in 2019 as principal investigator for the Interdisciplinary Consortium for Applied Research in the Environment (ICARE). The training program is designed to broaden participation in the environmental workforce and empower the next generation of scientists to apply research to environmental problem-solving. “It is my hope that the research focus on the Baltimore Harbor will set up ICARE and UMBC to make lasting, sustainable, and positive impacts in our city,” he notes. “ICARE was originally conceived as a way for ecologists and evolutionary biologists on campus to get together. The NRT added this component of engaging the community in our research,” Mendelson explains.

“At UMBC we are all so invested in this mission of inclusive excellence,” she says. “The racial and ethnic diversity is really low in the environmental sciences, so we wanted to make a difference there as well.”

UMBC partners across five disciplines and three colleges used the time amid the pandemic to organize the program, which will be funded until 2024. Over the next few years, they expect that 30 students will participate. Each student will receive full funding toward a master’s degree. They will also have a chance to collaborate with UMBC faculty, community stakeholders, and scientists and engineers in government, non-profit organizations, and industry careers.

Since 2019, the NIH’s National Institute of Aging (NIA) has awarded Laura Girling, director of UMBC’s Center for Aging Studies, more than $750,000 to examine the experiences of people with dementia who live alone in community settings. Recently, Girling has used this funding to research how COVID-19 social distancing guidelines impact people with dementia. She also examines the ethics of including people living with dementia as research participants.

“The social sciences are a hallmark of the UMBC experience, and this is reflected in the funding,” says Steiner. “The excellence and national competitiveness of all of our research programs allows us to grow our research portfolio and pursue more funding for it.”

Photos by Marlayna Demond ’11 for UMBC, unless otherwise noted.