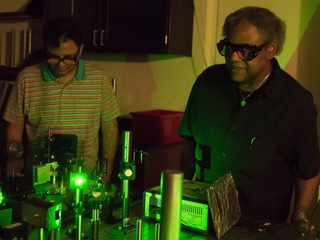 In addition to being an accomplished researcher, Johnson has successfully mentored dozens of students from all backgrounds as they pursued advanced degrees, maintaining contact and continuing to offer support long after graduation. And he’s held key leadership roles in his field, from co-chairing the annual Conference on Lasers and Electro-Optics (CLEO) in 1992, to serving as president of the Optical Society in 2002 and as the editor-in-chief of Optics Letters, the premier peer-reviewed optics journal, from 1995 – 2001.

This year, Johnson’s long-term commitment has resulted in a new accolade: the Stephen D. Fantone Distinguished Service Award from the Optical Society. The award is presented each year to someone who has served the Optical Society in an “outstanding way” over an extended period. Ever humble, “Being a past president [of the Optical Society], being on the board, and so forth, when I saw this email about this award, my initial thought was, ‘Ok, they want me to be on the committee to select the awardee,’” Johnson recalls. “It never occurred to me that it was for me. It was quite surprising, and it’s quite an honor.”

Beyond his work within the Optical Society, Johnson was also recently named to the Committee on Diversity and Inclusion on the Technical Advisory Board of the Institute for Electrical and Electronics Engineers (IEEE). Johnson says there hasn’t been nearly enough change in the number of non-white and women physicists and engineers since he started in the 1970s, and he has made supporting inclusion in physics and engineering a cornerstone of his career.

“There’s still a lot to be done in our professional societies to build up and attract both women and minorities,” Johnson says. “We still have work to do to expand the opportunities to a broader set of people and bring in new ideas. So being on some of these committees is important.”

Closer to home, Johnson works hard to create an inclusive environment in his own research group. “I like to think of us as a family,” he says. Johnson knows how powerful it can be for young scientists to meet researchers with more experience and have opportunities to forge connections. With this in mind, he says, “I try to give my students as many opportunities as possible to go out and give presentations and be involved in the field of science.”

When working with students of all backgrounds, Johnson’s “kindness comes through,” says Stephen Fantone, after whom the award is named. Fantone has known Johnson for many years through the Optical Society, but has no role in the awardee selection process. He shares, “Anthony understands the role of nurturing students, helping them to find their inner spring and to fulfill their potential and their own personal dreams.”

Students are not the only beneficiaries of Johnson’s support. “I gained many nuggets from his advice and leadership to the American Physical Society on graduate education and diversity, long before I made it to UMBC,” shares Belay Demoz, professor of physics and director of the Joint Center for Earth Systems Technology (JCET). “As another Black physicist at UMBC, he is my go-to guy for advice on how to handle delicate things; he is generous with his time and has a calming effect on me.” Anthony Johnson (right) works with students in his lab on a laser setup at CASPR in 2017. Photo by Marlayna Demond ’11 for UMBC.

Johnson’s colleagues recognize the range of important contributions he has made over the years. “The CSEE department is delighted to hear of these richly deserved honors for Dr. Johnson. He is a valued colleague in the department, and a world-renowned authority in the area of optics and photonics,” shares Anupam Joshi, professor and chair of CSEE.

Joshi notes, “These awards recognize that in addition to being a great researcher, he embodies the service mission of a public university, addressing important societal challenges like diversity and inclusion through his service to the major professional organizations.”

Johnson got his start in optics as an undergraduate at Brooklyn Polytechnic Institute (now the NYU Tandon School of Engineering) in the 1970s. A physics instructor encouraged him to pursue an internship at Bell Labs through the company’s Summer Research Program for Women and Minorities. The experience set Johnson’s entire career in motion.

“That’s where I really got my love of science and optics,” Johnson says. He earned his Ph.D. in physics from City College of New York, completing his doctoral research at Bell Labs. After his Ph.D., Johnson continued to work at Bell Labs for nearly 15 years, when the lab was in its heyday. “During my doctoral research at Bell Labs, I learned just how many celebrities in physics were there. I could walk down the hall and talk to people we put on pedestals,” Johnson remembers. “It was quite an experience.”

At Bell Labs, Johnson also had the opportunity to mentor interns coming through the same program that had gotten him started. His physics instructor’s impact on his trajectory was not lost on Johnson, and he made a concerted effort to pay it forward with his interns. Eventually, Johnson remembers, “I said, ‘You know, I could enjoy doing this at a university.’”

So, Johnson made the move to academia. After eight years as a department chair at the New Jersey Institute of Technology, he joined UMBC in 2003. In 2006, he became the UMBC lead on the university’s very first inter-institutional research center when one of his former Bell Labs colleagues, now at Princeton University, suggested the idea. Members of Johnson’s lab group manipulate a complicated laser setup in the lab. Photo by Mralayna Demond ’11 for UMBC, taken 2017.

NSF funded the Engineering Research Center (ERC), named Mid-Infrared Technologies for Health and the Environment (MIRTHE), for 10 years. The center supported research, graduate students, and an annual weeklong meeting where the students from the participating universities shared their progress and forged lasting connections. The six-institution collaboration was headquartered at Princeton, and Johnson served as one of two deputy directors.

The center’s work largely focused on medical applications of infrared technologies. For example, one of the group’s inventions included a breathalyzer-style device to detect ammonia, which can indicate liver and kidney problems.

Today, Johnson serves as the director of UMBC’s Center for Advanced Studies in Photonics Research (CASPR). “I’m cherishing being in academia and working with faculty and students, and, in particular, having students and graduating students pursuing advanced degrees,” Johnson says. “It’s really a satisfying process and enterprise, so that has been quite enjoyable.”

Colleagues also cherish their time with Johnson. In particular, Fantone says, Johnson is well-suited to handle challenging conversations. “In conversation, you can be on opposite sides of an issue, but he doesn’t adopt polarizing tactics,” Fantone says. “He wants to have civil discourse, which leads both parties in the discussion to a better place.” Fantone has seen this play out time and again in conversations with students and colleagues. Another perspective on one of the laser setups in Johnson’s research laboratory. Photo by Marlayna Demond ’11 for UMBC, taken 2017.

David Auston, one of Johnson’s first mentors at Bell Labs with a lengthy career in research and academic administration, is “thrilled” that Johnson is the 2021 award recipient. “Anthony is an outstanding scientist who has fulfilled many key leadership roles with distinction both in the Optical Society and in the scientific community at large,” Auston says. “This is a most deserving recognition of his numerous important contributions.”

As he enters his fifth decade of professional life, it seems certain Johnson will keep on giving to his community by generating scientific advances, creating meaningful relationships, and inspiring others. As Fantone puts it, “Working with Anthony puts a smile on your face, even when you are working on serious problems. And when you work with Anthony, you have high confidence that the effort is going to be successful.”

“He’s just a person you want in the trenches with you,” Fantone says. “Anthony is an exemplar of a complete human being.”