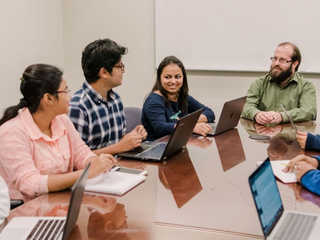 UMBC’s James Foulds was drawn to working in artificial intelligence (AI) and machine learning (ML) by “the possibility to make a direct impact on people’s lives and the health of our society” through advancing technology. He has now earned a National Science Foundation CAREER Award of nearly $550,000 over five years to support his research on improving the fairness and robustness of AI algorithms.

Foulds, assistant professor of information systems, joined UMBC in 2017. His lab focuses on human-centered approaches to AI fairness, working to address many practical limitations in the field.

Implementing an AI algorithm is often presented as a trade-off, Foulds explains. Do you want the program to be as productive as possible or as fair as possible? Foulds sees this as a false and harmful dichotomy.

Thanks to advances in AI, computers can accomplish tasks that would take a human a lifetime, but technologies built by people also perpetuate people’s biases, Foulds says. These biases can then have real impacts on people’s lives, often disproportionately harming already disadvantaged groups. For example, skewed AI and ML models have informed college admissions, credit card approvals, and recommendations for bail in court rooms.

The ethics of adopting such systems and ways to mitigate their potential harms have become focal points in Foulds’s work.

Foulds’s research demonstrates that developing an AI algorithm that prioritizes fairness can in fact yield more robust results. Models are often used to make generalizations about a population of interest, which can be helpful. But when a model is developed based on biased data, the prediction can suffer from “overfitting,” where the model describes a relationship between variables that doesn’t actually reflect reality.

In these cases, the model’s predictions can be misleading, rather than useful, and can cause real harm. A model that underscores fairness could provide more stable generalizations and help to avoid perpetuating or amplifying existing biases and false interpretations. Researchers currently quantify fairness in a variety of ways. Through his CAREER Award-supported research, Foulds wants to develop a unifying framework. From there, he will create a user interface to study how people come to a consensus on defining fairness in a given situation.

The project will target decisions or advice based on things like Medicaid waitlist data, career recommendations, and social media usage data. These all have intrinsic biases that can significantly impact trends and outcomes in society, or the way industry addresses specific problems.

For example, each U.S. state has a different way of determining who receives health coverage through Medicaid. Creating a better model to perform a needs-based ranking of the waitlist for Medicaid coverage could help officials make more informed, equitable decisions about who should receive coverage.

Bringing more people into the conversation

Foulds believes his research will mitigate barriers to responsible and effective deployment of AI technologies by showing that it is possible to develop a discipline-standard model for fairness. He hopes to make his lab a source of user-friendly AI tools for those who want to implement the model in their work.

As an educator, “I want to inspire the students I come into contact with to see how fascinating and exciting (and potentially lucrative) AI, ML, and data science are,” Foulds shares. “And I want to instill in them the importance of ethical thinking in the practice of data science.” James Foulds (third from right) meets with students in his lab in 2019.

Beyond his own courses, he hopes to partner with Baltimore Polytechnic Institute, a local STEM-focused high school, to provide students with exposure to a range of new career options that can have a major societal impact.

In addition to Foulds, UMBC is celebrating the recent CAREER Award of Ramana Vinjamuri, who joined the university’s computer science and electrical engineering faculty in 2020.

Vinjamuri hopes to be able to demonstrate how a person might more quickly learn skilled movements (like playing the piano) or relearn lost movements after experiencing a stroke. Like Foulds, he feels energized to tackle big questions with the potential for significant public impact.

Banner image: James Foulds with his students in 2019. Photos by Marlayna Demond ’11 unless otherwise noted.