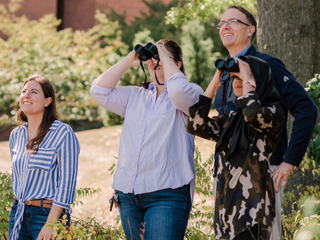 A revolutionary group of scientists has been rethinking for two decades how we understand bird song, with women leading the way. Several of these scientists are from UMBC, and their latest research has revealed findings not just about birds, but about bird researchers.

Elaborate bird song had been considered mostly a male trait for centuries, famously discussed by Charles Darwin. But Karan Odom, Ph.D. ’16, biological sciences, published a landmark paper on female bird song in 2014 that helped change that viewpoint. Odom’s study found that as many as 70 percent of female birds sing. Her extensive research also established firmly that both sexes almost certainly sang in the common ancestor of all bird species—a radical idea in ornithology. Karan Odom, Ph.D. ’16, with a Troupial Oriole, a species where both sexes sing. Photo by Kevin Omland.

Odom conducted research at UMBC with Kevin Omland, professor of biological sciences, whose lab has led much of the research in this area. Now, a new paper led by Casey Haines ’19, biological sciences, has documented what the Omland group and others have suspected all along: Women are more likely than men to be authors, and even more likely to be first authors (research leads), on papers about female bird song. Therefore, it is largely women who have reshaped this classical field of study.

The findings, published this week in Animal Behaviour, suggest that a diverse group of researchers is critical for scientific innovation. Diversity could also help build a more accurate and complete understanding of bird biology and other fields.

Haines and Omland completed the research with co-authors Odom and Evangeline Rose, a Ph.D. candidate in Omland’s lab. They examined 59 bird song papers published between 1997 and 2016. “I believe this paper is a great example of how diversity expands the type of research scientists are doing,” Haines says. “Female bird song research has been underrepresented in the literature until only recently. A diverse pool of researchers may result in new questions being asked and new approaches to answering those questions. I would love to see this type of research applied in other areas of STEM.”

Kevin Omland discusses the importance of diversity in science, using his lab’s bird song research as a case study, at UMBC’s GRIT-X 2019.

Other research cited in the new paper has found that women are more likely to study female animals (including humans), which have been historically understudied, as well as species that have gotten less attention in research. Female authors also publish more often with women co-authors, opening doors to greater funding and opportunities for more women in science.

More generally, research has shown that diversity among scientists leads to greater creativity in questions, ideas, and methods.

Omland acknowledges that this kind of study is outside his lab’s avian evolution wheelhouse, but he hopes it will spark further conversations. “We’re able to add an important data point to these discussions,” he says. And while the new paper has been in the works for some time, “In this moment, this research seems to have gained an increased weight.”

Haines and colleagues acknowledge that their study is imperfect. For example, “Our data represent gender in a binary framework, which is not reflective of society, potentially resulting in mis-gendering authors who are non-binary or gender minorities,” the paper states. “Gender minority authors make important contributions to science and are a vital part of increasing diversity. We recommend that more-detailed future studies provide opportunities for authors to self-identify their gender to avoid the possibility of mis-gendering.” Casey Haines ’19 with an Eastern Bluebird at a field site in Maryland. Photo courtesy Casey Haines.

Even with its limitations, the paper provides an important glimpse into gender dynamics in ornithology. For an emerging researcher like Haines, it was an eye-opening experience.

“Personally, it was amazing to find that the percentage of women who hold first-author positions on female bird song has increased so much within the last 20 years,” Haines says. “I think it speaks volumes on how far both female bird song and women in science have come.”

Haines herself is on a path to pursue graduate study in animal behavior based on her experience in the Omland lab. “Working with Dr. Omland, Evangeline, and the rest of the Omland lab was definitely the most memorable and enjoyable part of my time at UMBC,” she says.

“It’s essential that we continue to build environments where researchers from all backgrounds are encouraged to explore new ideas and ask new questions,” Omland says. “Not only will this enable them to reach their potential as scientists, but it is also essential to expanding our knowledge of the world around us.”

Banner image: Kevin Omland, rear, goes birdwatching on campus with a few of his students. Photo by Marlayna Demond ’11 for UMBC.