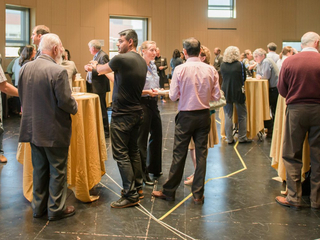 This story was first published on news.umbc.edu and was written by Sarah Hansen.
“The complex problems we face do not organize themselves neatly into the categories we’re used to,” says Carole McCann, professor and chair of gender and women’s studies. “We need to think beyond those boundaries.”
McCann leads the new Provost’s Interdisciplinary Activities Advisory Committee, which just hosted UMBC’s first social hour to bring together faculty from different fields, but with overlapping research and creative interests, to plant the seeds for future collaborations.
Provost Philip Rous shares that this event, and the committee behind it, respond to his conversations with faculty who identified “a real need for additional support in the area of interdisciplinary work.” Having opportunities to get away from the “disciplinary lens” and removing barriers to doing interdisciplinary work, he notes, is what will set UMBC apart as a community focused on solving complex, real-world problems.
Four faculty led informal discussions to start the conversation at this week’s event. Nicole King, associate professor and chair of American studies, discussed her work in Baltimore City, including collaborations with colleagues and students in sociology, visual arts, and media and communication studies. One project centers on a community garden in Curtis Bay, in partnership with a local school. Another focuses on interviews with Baltimore residents about their experiences with the city’s deindustrialization—interviews that students have developed into radio segments airing on WEAA.
For King, interdisciplinary research means “asking big questions, solving big problems, with whatever tools you need,” moving beyond artificial limits imposed by academic disciplines.
Amy Hurst, associate professor of information systems, conducts research in human-centered computing, particularly assistive technologies. She sees her field as an amalgam of design, behavioral science, and technology.
For interdisciplinary projects to be successful, Hurst says, “We need to be fluid in the languages of the different fields.” She, like King, emphasized the need to think beyond a single answer to a narrow question or a single technology to solve a narrow problem. She shares that when working with students, collaborators, or end-users, “Rather than giving them a hammer, I like to give them the toolbox.”
Tulay Adali, University Distinguished Professor of computer science and electrical engineering, says interdisciplinary research increases the impact of her work by applying it in new contexts. Rather than continuing to make small improvements to systems that have been in development for decades, applying her research to brand new fields can lead to positive change in leaps and bounds.
“It enriches what you’re doing,” Adali says. “You have to have patience, to invest your energy, but the rewards are huge.”
Tim Nohe, professor of visual arts, discussed his work at the interface of the arts and ecology. Nohe uses a variety of art forms to explore how different cultures steward the natural environment. A 10-year project of his, based in Australia, recently culminated with the exhibition Sounding Botany Bay at the Albin O. Kuhn Library. He’s also interested in urban landscapes and empowering Baltimore citizens to put pressure on local government to tackle environmental justice issues. That’s made considerably easier by today’s smartphones, because, Nohe says, “You have the tools of agency right in your pocket.”
“In the arts, which have always connected with a public or audience, we are aware of our responsibility to make our work reach people and move them intellectually and emotionally,” Nohe explains. “There’s knowledge to be discovered when disciplines come together, finding new points of entry into a problem or by finding ‘ah-ha’ moments through attentive and respectful dialogue across disciplines.”
McCann and committee member Rachel Carter, Ph.D. candidate in language, literacy, and culture, intend to extend the social hour into a series. Follow the committee’s myUMBC group to learn about upcoming events.
Tags: ovpr-news-2016
0 Comments (requires login)